Insha Allah, the Hillal Committee of Toronto will be meeting on Monday April 12th (29th Shabaan) to decide on the start day of Ramadan. Please visit our website after 930PM 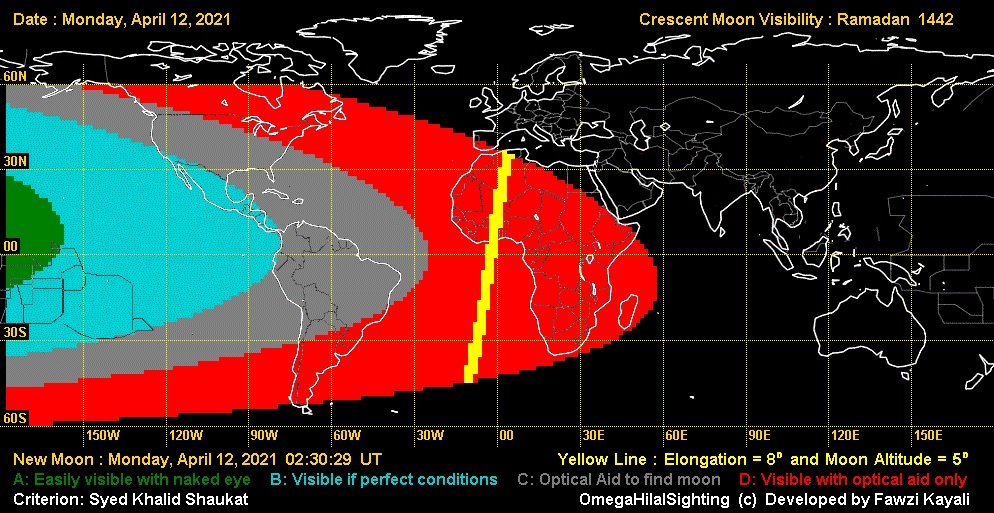 Dua when sighting the new moon:

O Allah, let this moon (month) pass over us with blessings, Iman, safety, and in the belief of Islam. Grant us the ability to act on the actions that You love and Pleases You. (O moon) My Lord and Your Lord is Allah”.

ISLAMIC REFERENCES ON SIGHTING OF THE MOON

“…So whoever of you sights (the crescent on the first night of) the month (of Ramadân), he must observe Saum (fasts) that month…” [Holy Quran 2:185]

“…They ask you (O Muhammad SAW) about the new moons. Say: These are signs to mark fixed periods of time for mankind …” [Holy Quran 2:189]

Ibn Umar (ra) reported that Allah’s Messenger (pbuh) made a mention of Ramadan and he with the gesture of his hand said: “The month is thus and thus. (He then withdrew his thumb at the third time). He then said: Fast when you see it, and break your fast when you see it, and if the weather is cloudy calculate it (the months of Sha’ban and Shawwal) as thirty days.” (Saheeh Muslim)

Abu Huraira (ra) reported Allah’s Messenger (pbuh) as saying: “Whenever you sight the new moon (of the month of Ramadan) observe fast. And when you sight it (the new moon of Shawwal) break it, and if the sky is cloudy for you, then observe fast for thirty days.” (Saheeh Muslim)

Abu Huraira (ra) reported Allah’s Messenger (pbuh) as saying: “Observe fast on sighting it (the new moon) and break it on sighting it. But if (due to clouds) the actual position of the month is concealed from you, you should then count thirty (days).” (Saheeh Muslim)

Kuraib (ra) reported that Umm Fadl (ra), daughter of Harith, sent him (Fadl, i.e. her son) to Mu’awiya (ra) in Syria. I (Fadl) arrived in Syria, and did the needful for her. It was there in Syria that the month of Ramadan commenced. I saw the new moon (of Ramadan) on Friday. I then came back to Medina at the end of the month. Abdullah b. ‘Abbas (ra) asked me (about the new moon of Ramadan) and said: When did you see it? I said.: We saw it on the night of Friday. He said: (Did) you see it yourself?-I said: Yes, and the people also saw it and they observed fast and Mu’awiya also observed fast, whereupon he said: But we saw it on Saturday night. So we would continue to observe fast till we complete thirty (fasts) or we see it (the new moon of Shawwal). I said: Is the sighting of the moon by Mu’awiya not valid for you? He said: No; this is how the Messenger of Allah (pbuh) has commanded us. (Saheeh Muslim)

Abu’l-Bakhtari (ra) reported: We saw the new moon of Ramadan as we were at Dhit-i-‘Irq. We sent a man to Ibn Abbas (ra) to ask him (whether the sighting of a small moon had something of the nature of defect in it). Upon this Ibn ‘Abbas (ra) said that the Messenger of Allah (pbuh) had said: “Verily Allah deferred its sight, but if (the new moon) is hidden from you, then, complete its number (thirty).” (Saheeh Muslim)

Talhah bin Ubaidullah (ra) reported: At the sight of the new moon (of the lunar month), the Prophet (pbuh) used to supplicate: “Allahumma ahillahu `alaina bil-amni wal-iman, was-salamati wal-Islam, Rabbi wa Rabbuk-Allah, Hilalu rushdin wa khairin (O Allah, let this moon appear on us with security and Iman; with safety and Islam. (O moon!) Your Rubb and mine is Allah. May this moon be bringing guidance and good).”(Tirmidhi)